Since early 2015, 2B has been thoroughly enjoying working with Burnby Hall Gardens and Museum to assist with their Jubilee project.  The regeneration of the historic ‘Backhouse’ Rock Garden is just one element of the project, which also involved the restoration of potting sheds and repair of the upper lake.  The whole project has been made possible as a result of support from The Heritage Lottery Fund.

At the time of our first site survey (see our early blog post), The Rock Garden was more like a ‘dingly dell’, with the rocks almost completely hidden under the trees and shrubs that had made the area their home for the past century.  In fact, apart from a sign “To the Rock Garden” no-one was really aware of its existence.

A thorough review of the existing planting, levels survey and historic research were all required before a strategy for regeneration could be developed, in close liaison with the garden staff.

Apart from a 1904 plan for the development of the top lake, many of the early records had been lost.  Using this plan as the base; 2B gathered historic mapping, from sources such as the Ordnance Survey.  These maps, when overlaid, allowed us to establish what, and when, changes occurred. 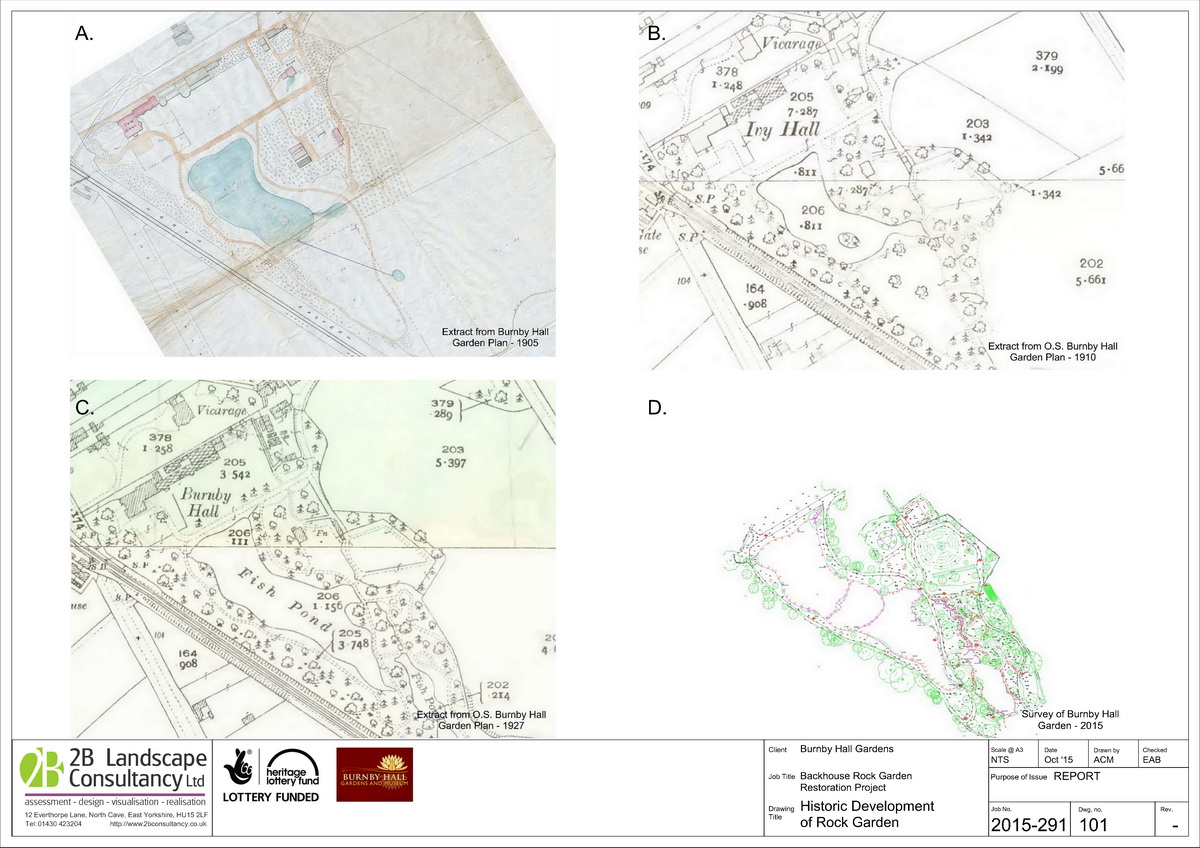 Over the decades, the rock garden had become overgrown with successful, vigorous, species such as Hypericum, Cotoneaster and Mahonia.  2B undertook research into the plants that would have been available at the time by reference to Backhouse Catalogues, period books, and Backhouse marketing material.

2B is indebted to the generous sharing of research by members of The Yorkshire Gardens Conservation Trust, Daphne Hamilton (who grew up on the Backhouse Nursery), and Dr Sally O’Halloran, and her students, of the Sheffield University Landscape Department.

Coincidentally, Sally and her students were involved with the regeneration of another Backhouse Rock Garden at Whinfell Quarry, Sheffield.  2B staff and The Burnby Estate Manager, Ian Murphy, were pleased to be able to assist with the replanting at Whinfell.  This first-hand experience, of getting our hands dirty - planting, hauling and spreading gravel - proved invaluable when planning the approach to the work at Burnby. 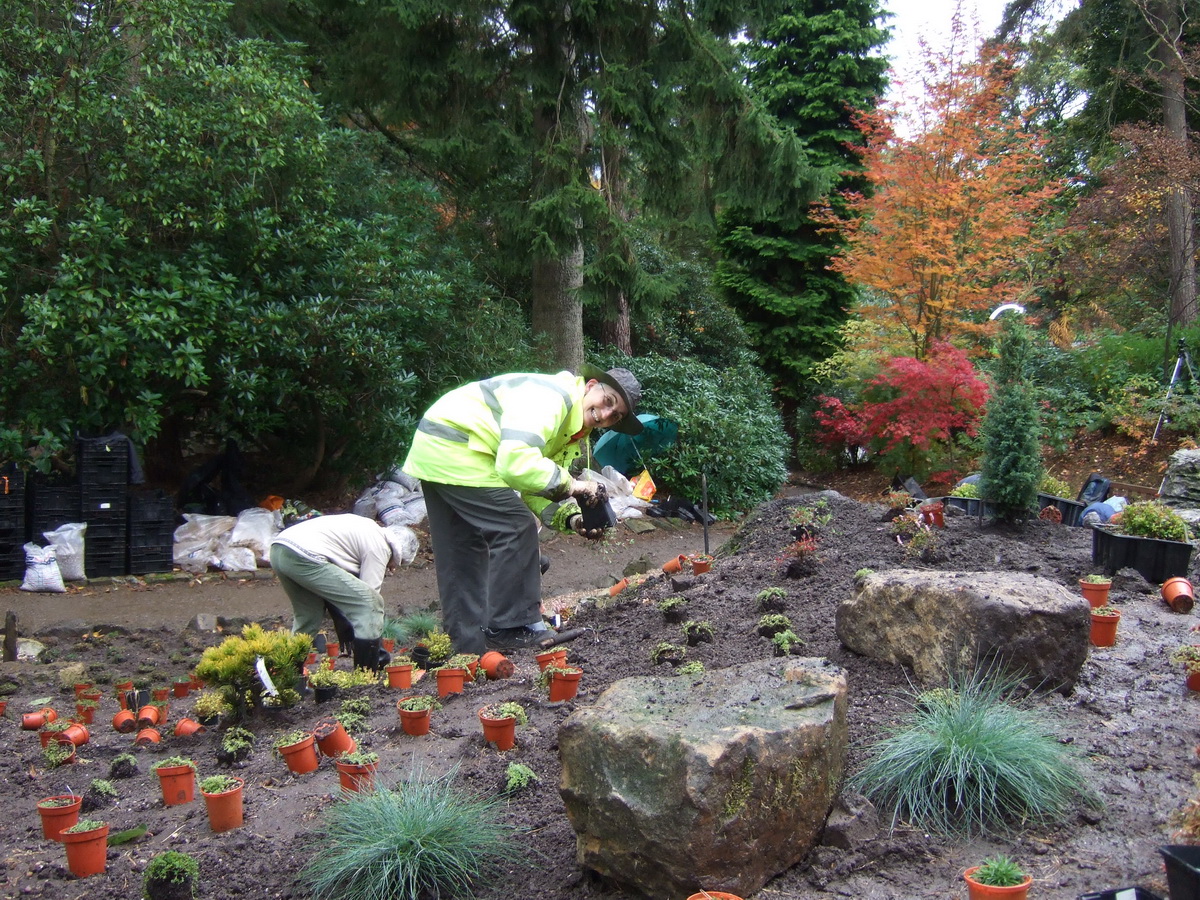 Image: Helping at the replanting of Whinfell Quarry, another Backhouse design of the era

The agreed approach was to completely clear the site and leave it fallow for at least one growing season (in the end two) to enable the eradication of Mares Tail and Ground Elder, which was taking hold in a number of locations.

Landmark (Yorkshire) Ltd won the tender to clear the site over the winter of 2015-16.  The change was dramatic and was met with overall very positive comments – mostly relating to how wonderful it was to see the rocks.

During the fallow period a fenced route was created through the area, to allow people to enjoy the rocks and the wonderful wire mesh and willow sculptures on display. 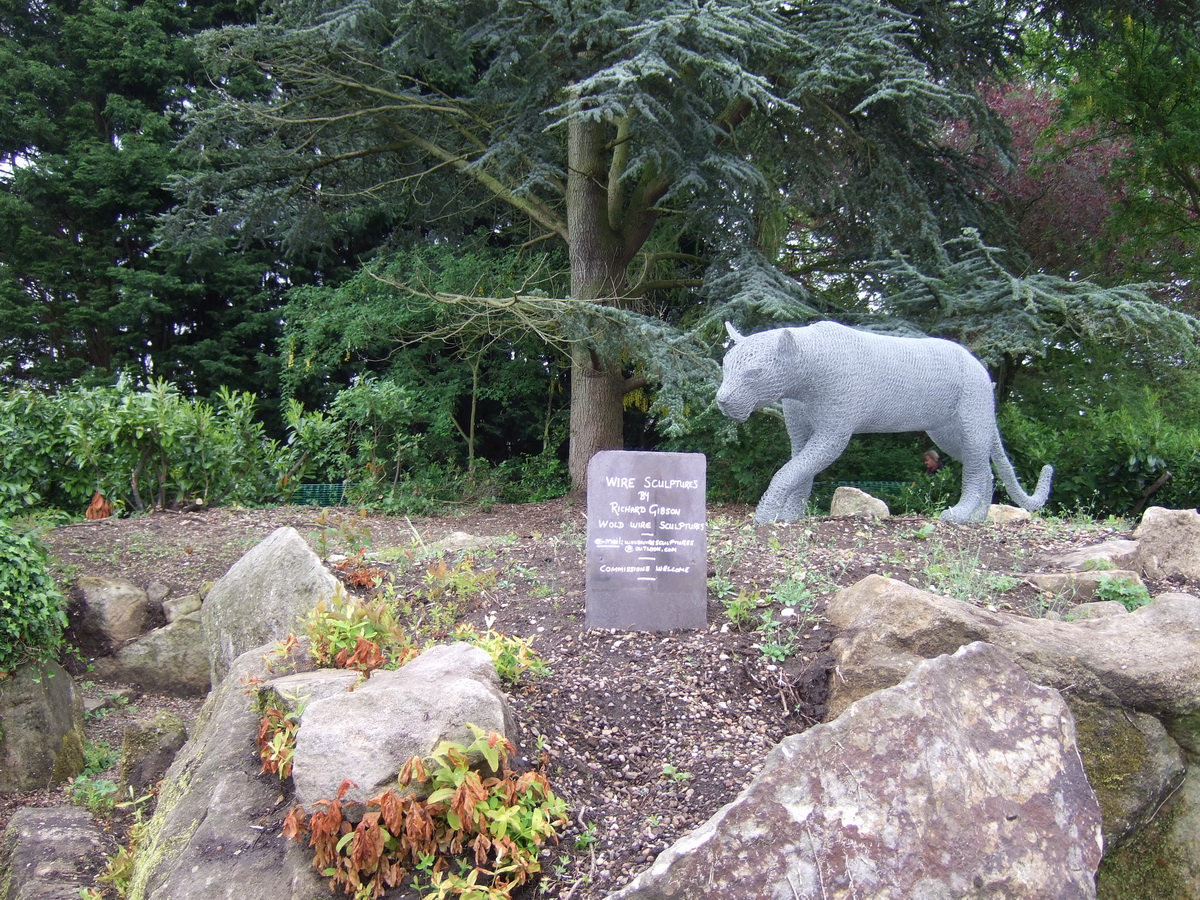 Meanwhile, Burnby staff undertook a programme of spraying and disturbing the soil (to encourage re-growth of weeds) for the growing periods of 2017 and 2018. 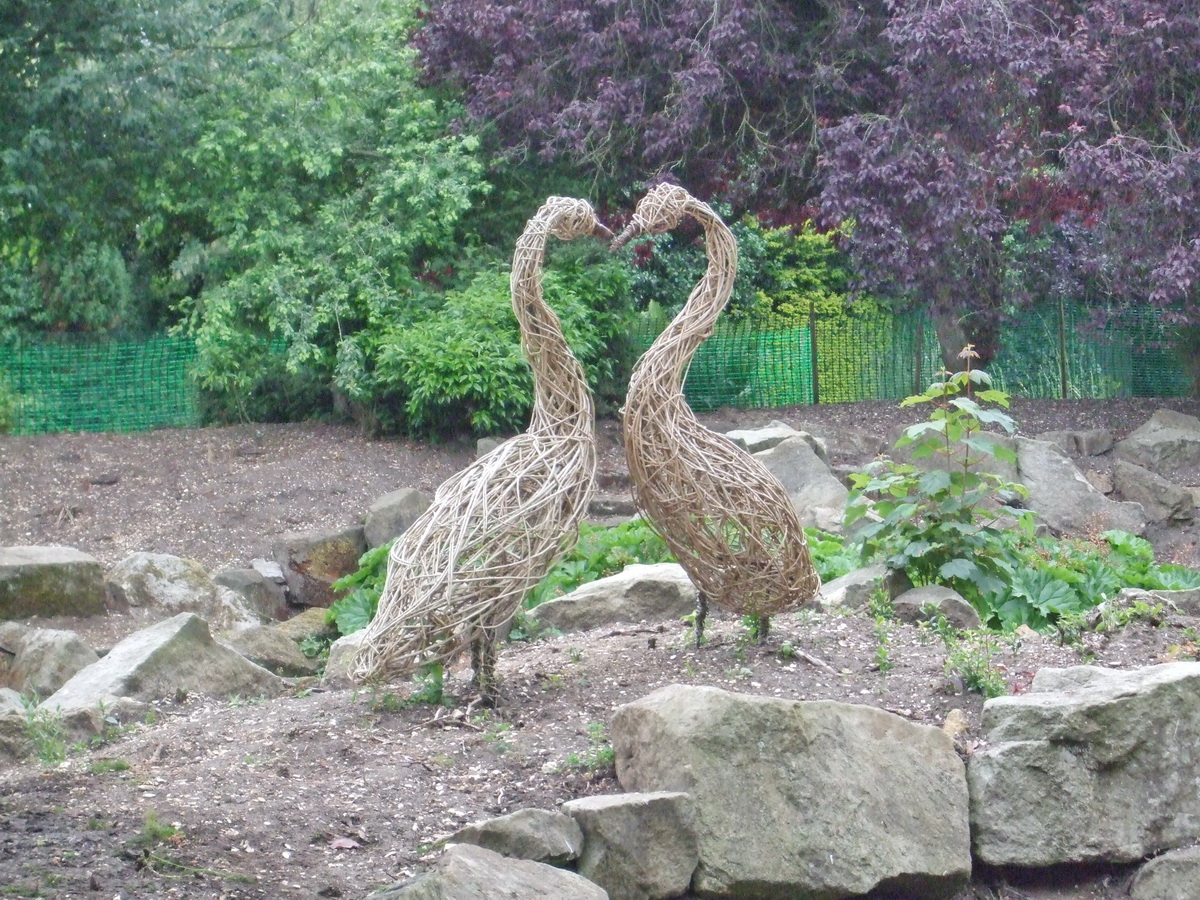 Kevock Rock Garden Plants won the contract to grow and source all the plants for the rock garden.  The plan was based on a schedule of plants developed during the research stages of the project.

Choice of plants took into consideration the fact that Burnby is open to the public and is maintained by a very small team of trained gardeners supported by volunteers. Whilst we wanted to recreate the aesthetic intended by the original designers, choices had to be appropriate for the times. Plants need to be tough, easy to look after, and available from growers.  Where necessary, disease resistant, modern varieties were used.  We took the opportunity to learn from some of the ‘mistakes’  originally made and excluded species that we knew, after 100 years, had dominated all others! 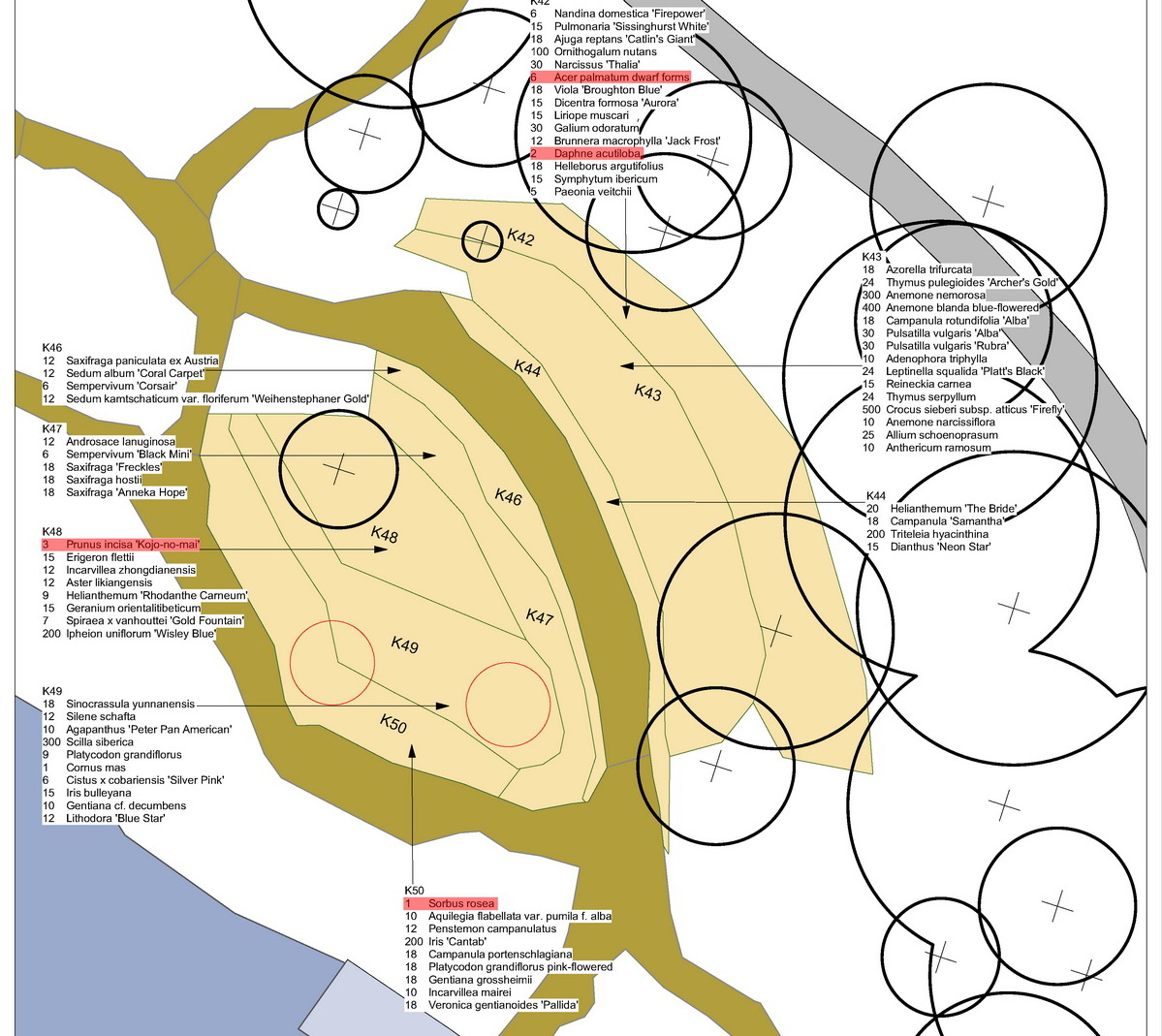 Image: Part of Final Planting plan for the central area

The planting areas were mulched with 50mm of gravel to create a free-draining surface. This will keep the tops of the plants in the dry but provide a cool, damp root run, by limiting evaporation – and will discourage weeds but make it easier to spot one; at least until everything becomes well established.

Community involvement with this type of project is very important and Burnby is lucky to already have a small team of loyal volunteer gardeners.  However, the scale of the project was too much for them to undertake without help.  A recruitment day, at the beginning of September 2018, resulted in a wide range of people volunteering to help - from people who have been visiting the gardens since they were children, to children from a local primary school.

Even 2B’s staff team rolled up their sleeves and enjoyed a beautifully warm October day, out of the office, planting up an area in the middle. 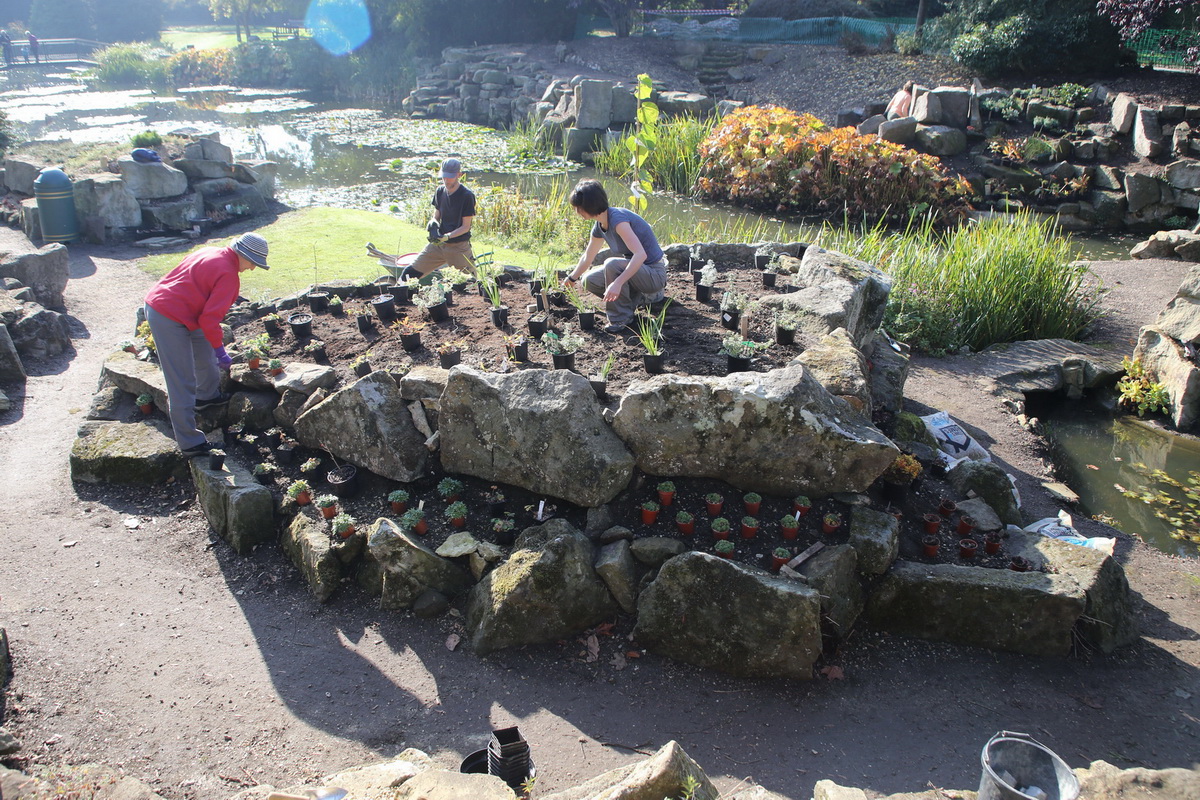 Meanwhile, the gardening club from a local primary school were busy planting up another area.  It is to be hoped that the experience might inspire one or two think about the landscape profession when the time comes for them to think about careers

Traditionally, all the Rock Garden paths had been surfaced with loose gravel, but it was agreed that an accessible route should be created.  As part of the research for this route; a group of visually impaired members of Sight Support and a wheelchair-bound Friend of The Garden were invited to visit, to navigate possible routes and comment on any issues that they could anticipate.  Their input was very helpful and informed the final proposals for the accessible route. 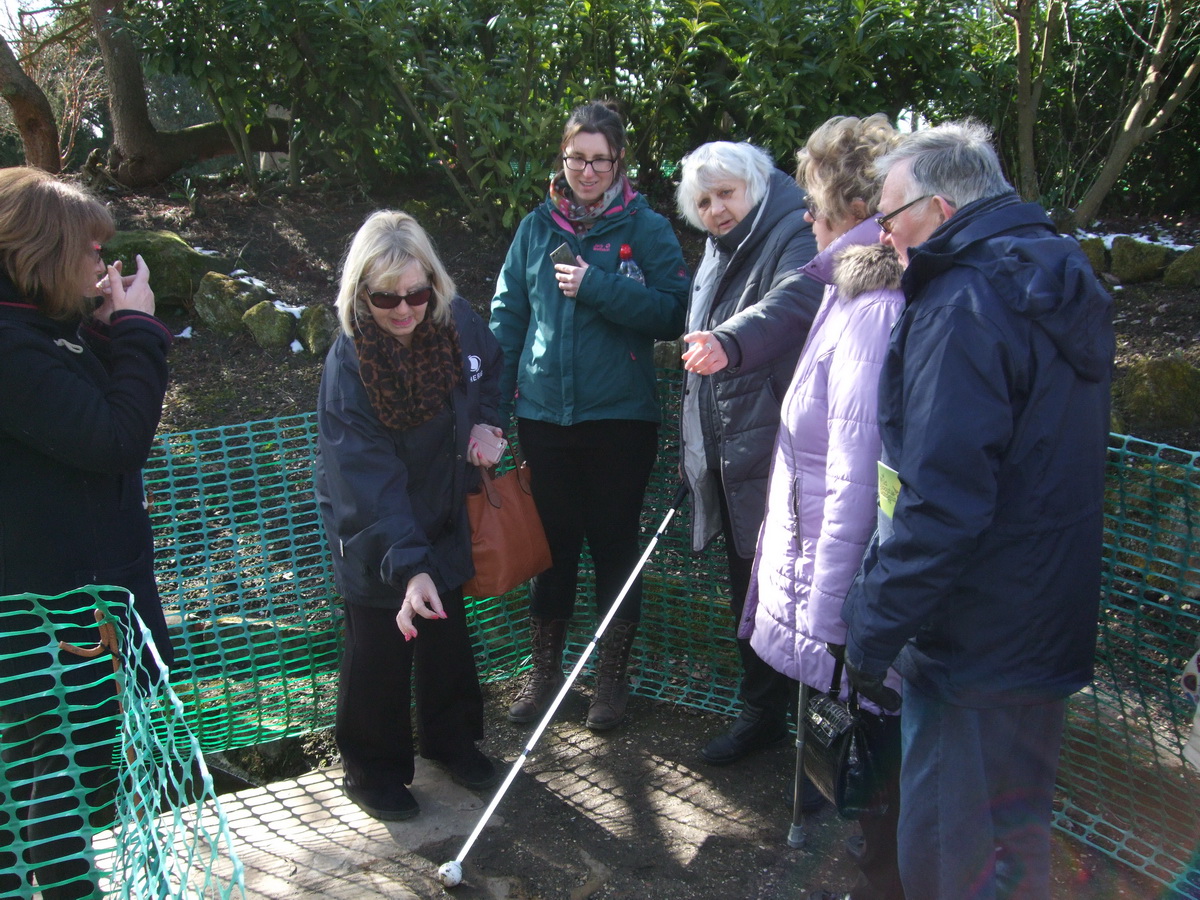 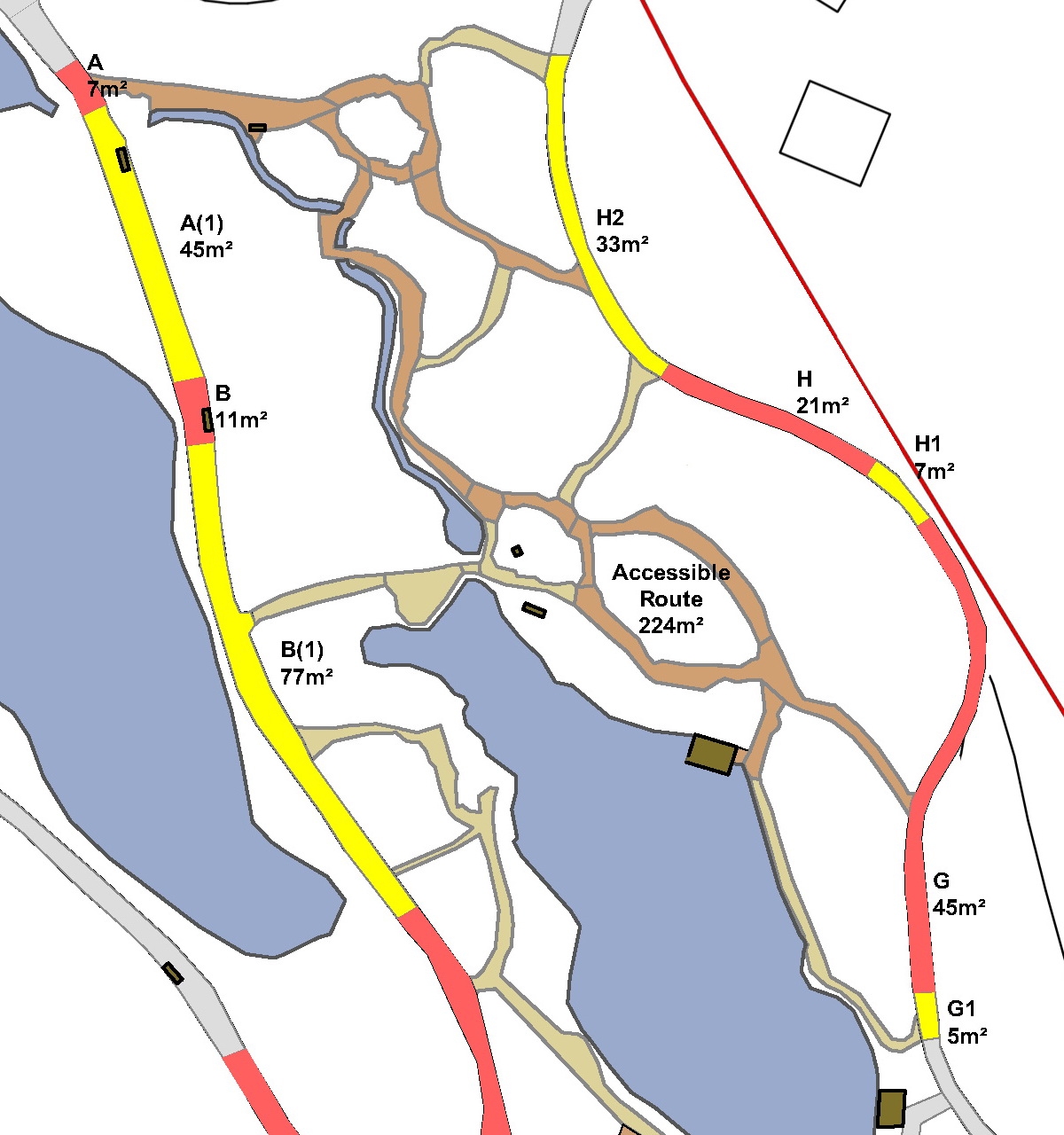 Whilst some of the paths have been given a fresh dressing with gravel, the accessible route has been created using Flexi-stone.  This is a free-draining bound gravel product that was able to be laid on the existing, well-compacted, path surface without necessitating any sub-base construction.  The surface was already compacted well enough, having been used as a path for over 100 years!  Other surrounding bitumen paths, that had split as a result of root movement, were repaired using Flexi-pave (a bound recycled tyre and gravel surface).  This has resulted in free-draining flexible paths, removing the potential for trip hazards and puddles.


A new chapter in an ongoing story 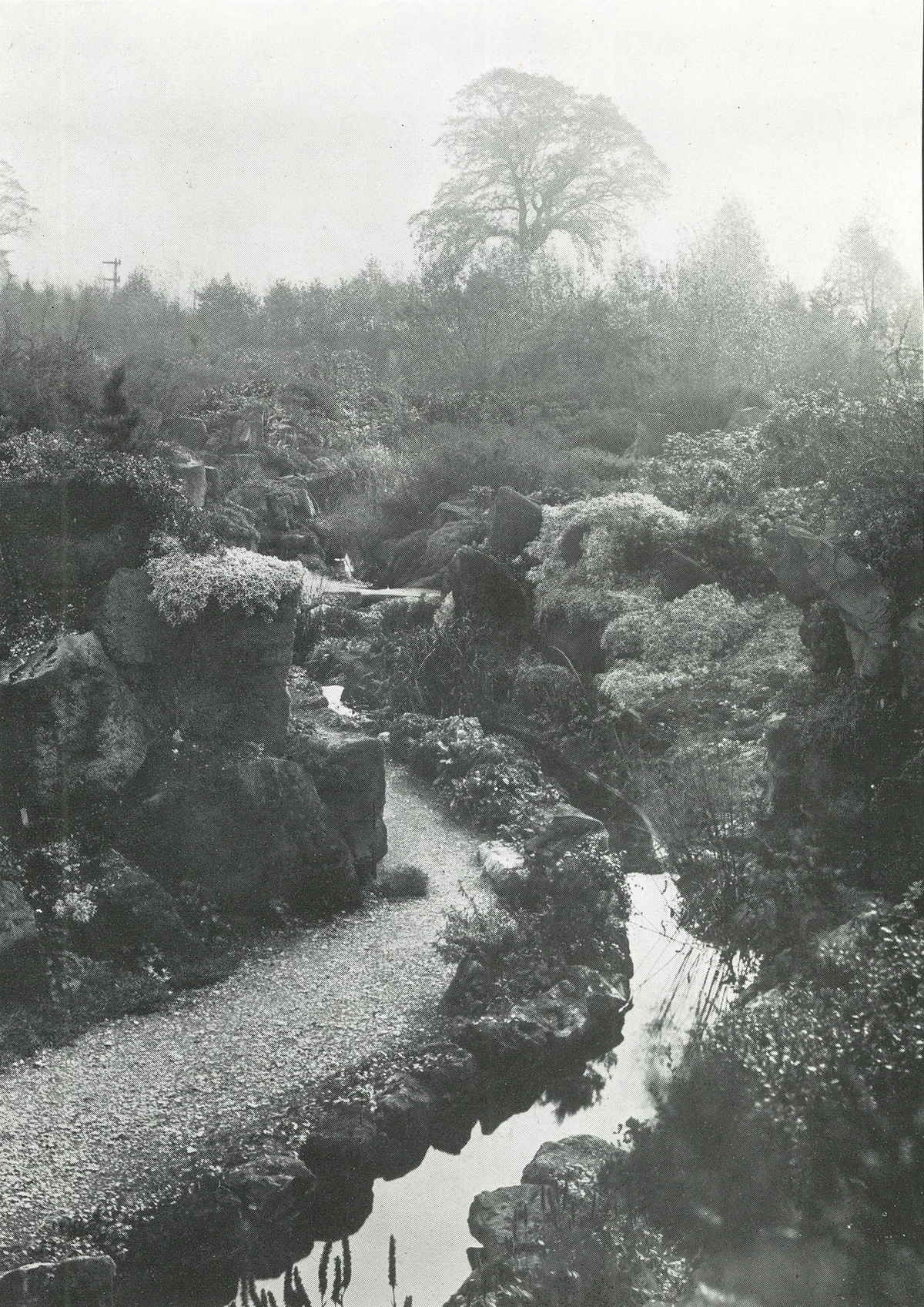 Image: Historic image of rock garden - somewhere between 1910 and 20 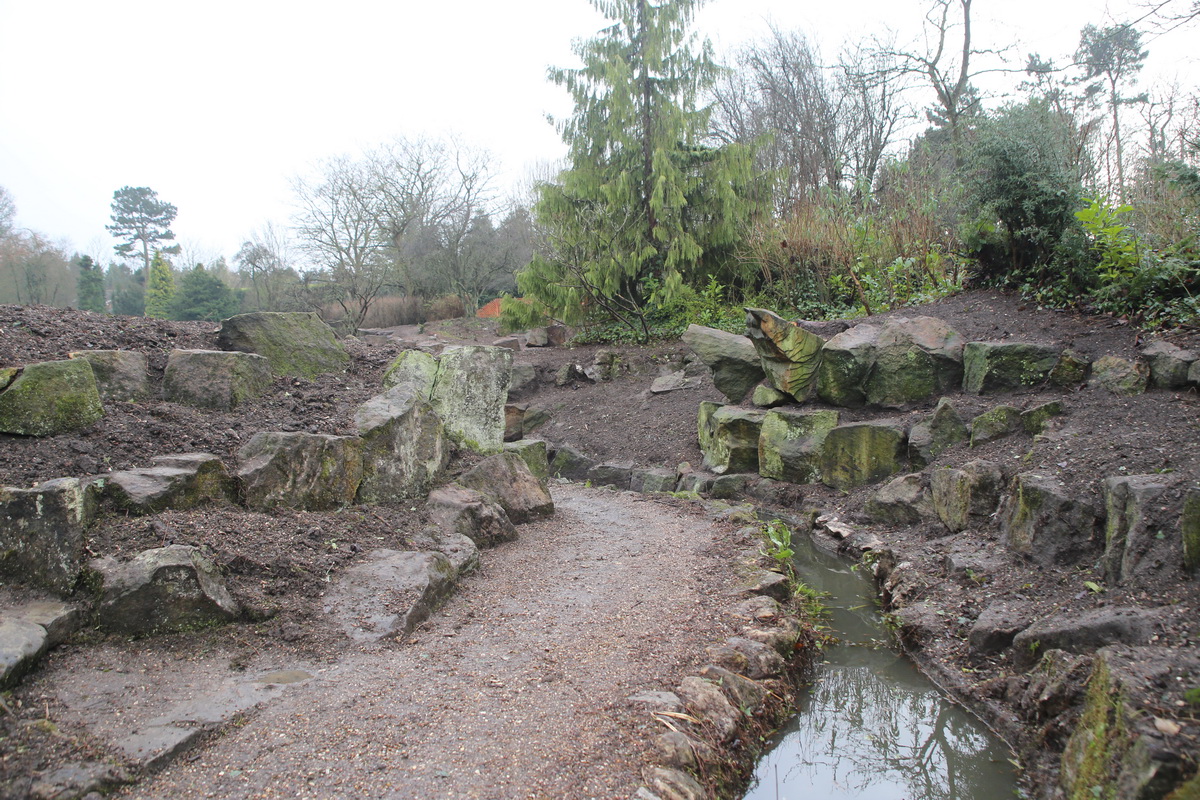 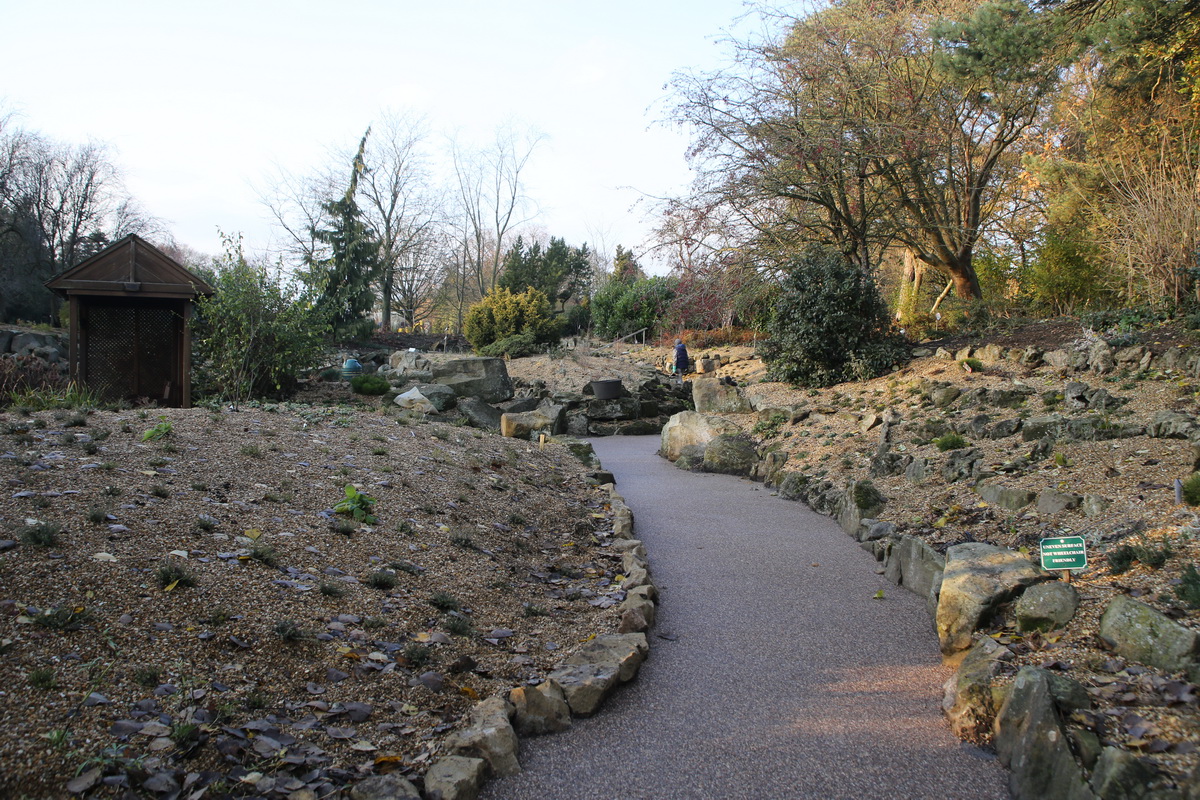 We are proud to have been part of a community that has come together to recreate a beautiful rock garden that will give pleasure for generations to come.  We look forward to seeing how it develops.