Our evidence was vital in securing an appeal success for a small housing site at Tetford in the Lincolnshire Wolds AONB, whilst in East Yorkshire we put the argument against a major housing scheme outside the development boundary, which was subsequently refused. Any contradiction here? We don't think so...

Tetford, in the Lincolnshire Wolds AONB, is a 'ring village' which is characteristic of some of the Wolds villages.  The appeal site was on the inner edge of of the ring, adjacent to fields which form the inner part of the ring.  Given the AONB context and the village layout, this is potentially a highly sensitive site.  However, the site is well-screened by mature trees to the boundary. Discussions with the developer showed that he would be content, not only to protect these trees, but also to protect a hedgerow by means of a clause in property deeds, to ensure that the hedge would be retained and would continue to fulfil a useful screening function. 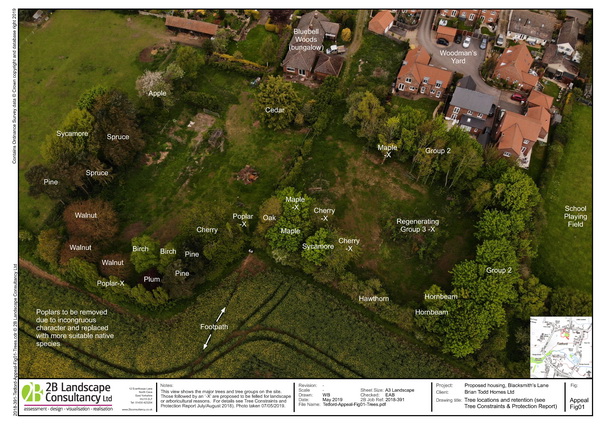 Drone photograph shows tree retention and loss on the site

After an officer recommendation for approval, the application was refused at planning committee.  The developer subsequently appealed.  Whilst our Landscape and Visual Appraisal and subsequent written evidence acknowledged that there would be limited effects on the AONB and the form of the ring village, the developer could make the argument, with conviction, that no undue harm would arise as a result of the development.  This carefully-considered and balanced position was reflected in the Inspector's subsequent appeal decision:

The appeal was granted.  The developer's final word?

"I can’t thank you enough for your hard work on this project."

Meanwhile, up in Yorkshire... a local developer was proposing a rather larger development (67 houses) outside the development boundary of Hutton Cranswick. 2B was asked to provide landscape evidence to a planning inquiry on behalf of East Riding Council, who had refused the application.  We were happy to do this from the outset - such a large development proposal in open countryside was simply against the principles of the plan-lead system we all depend on to manage development.  Amongst other issues, we looked at the 'grain' and historic development of the settlment. 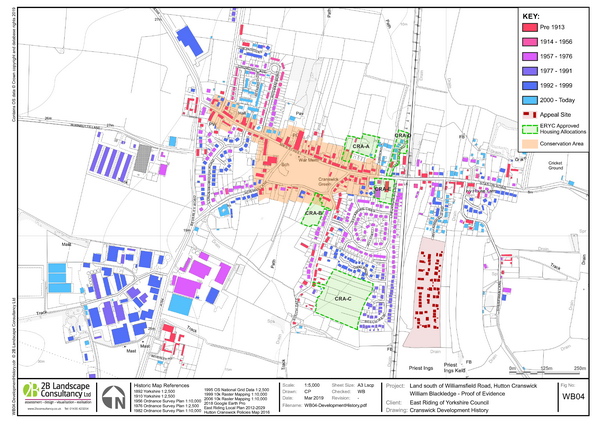 Historic development of the settlement

The arguments were complex, but the first thing we noted was some significant omissions from the appellant's LVIA, which rendered it's findings dubious. I can't do better than to repeat the Inspector's comments in his appeal decision:

"The first step in an assessment of a proposal's effect must be to assess the benchmark position and the susceptibility of the landscape. However, as accepted by the appellant's landscape witness, this was not an exercise undertaken in the LVIA.

Perhaps the most important issue stems from the apparently contradictory approach adopted by the appellant's LVIA and Inquiry evidence. The LVIA did not consider the effect of the proposal beyond the site boundary, for no clear reason. Especially given the broadly level nature of the surrounding countryside, there must logically be an effect beyond the site itself, but its magnitude and consequences were not considered.

In contrast, the appellant's evidence at the Inquiry addressed the settlement landscape aside from the appeal site. The Council characterised this as a 'polo mint effect' as it omitted the effect on the character of the area including the appeal site. The two different approaches, neither of which provides a full analysis of the effect of the proposal, were not satisfactorily explained and this weakens the appellant's position.

Overall, I consider that the proposal would harm the character and appearance of the area, and conflict with Local plan policies..."


The other main factor in the inquiry was the housing land supply, upon which the Inspector concluded that the Council has a five year supply of deliverable housing sites.  This was in effect, an endorsement of the considered and professional approach of the Council.

The appeal was dismissed.

It was interesting to be 'on both sides of the fence' in the same year but, in our view, it is the same robustness and clarity of landscape assessment which contributed to the decisions in both cases.