Back
2B's house and office - a SuDS retrofit exemplar

Coo, what is a SuDS retrofit exemplar?  Well, SuDS = Sustainable Drainage Systems and retrofit means it wasn't originally designed this way, but now it is!  Exemplar? - you would be hard-pushed to do more or better!

So, our house is a fairly standard 70's detached house but, over the years, we have added quite a few features to catch and manage rainfall on the plot.  We do this to put our money where out mouth is, but mostly to learn first-hand about constructing and living with these features.

Four of them!  The first was on the rear of our garage, and its creation was documented in this timelapse video:


The second and third green roofs were on our shed/woodstores. 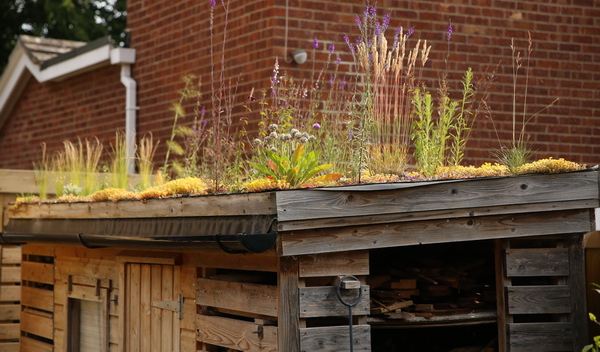 A bit token, we know, but their visibility is important to the message and the biodiversity benefits should not be ignored.

The fourth green roof was on our office and it has been fascinating to see how this has changed over the years since the office was built in 2014.  It has never been planted - it just grows what it wants to with an occasional 'weeding': 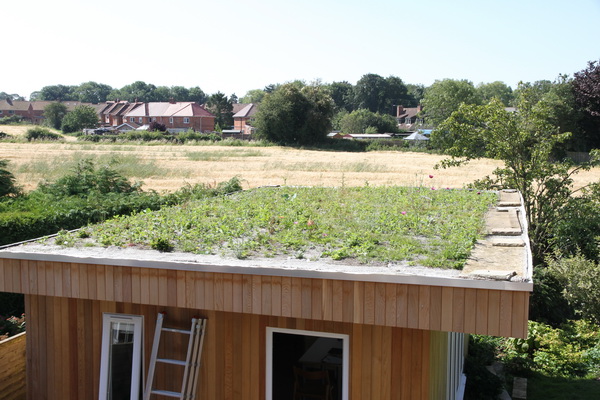 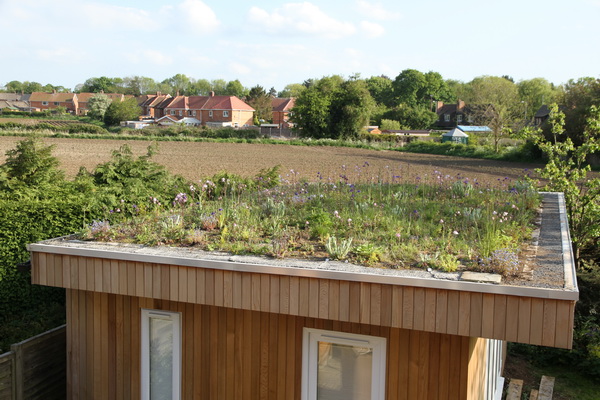 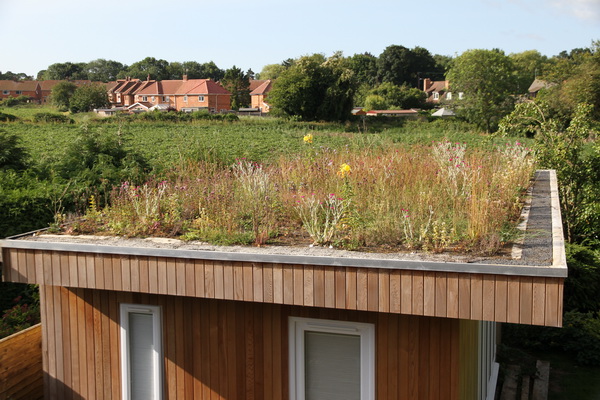 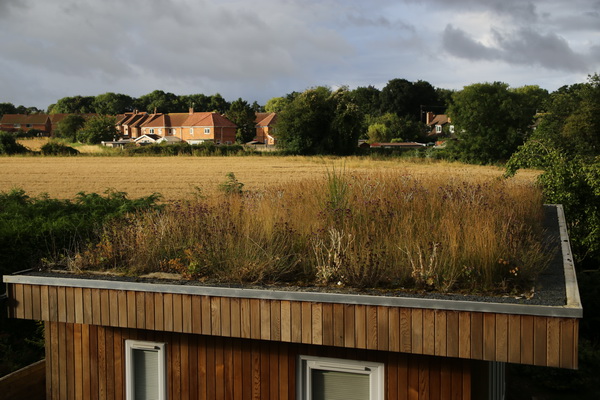 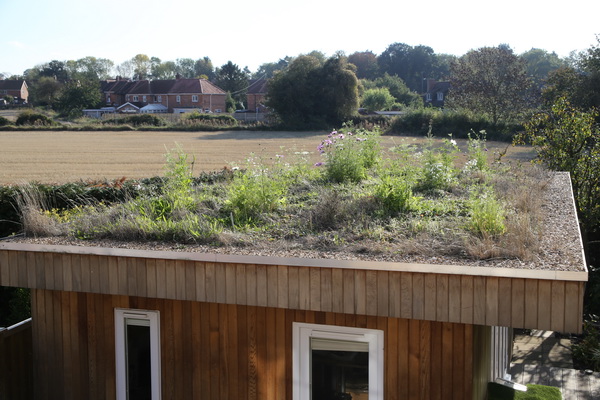 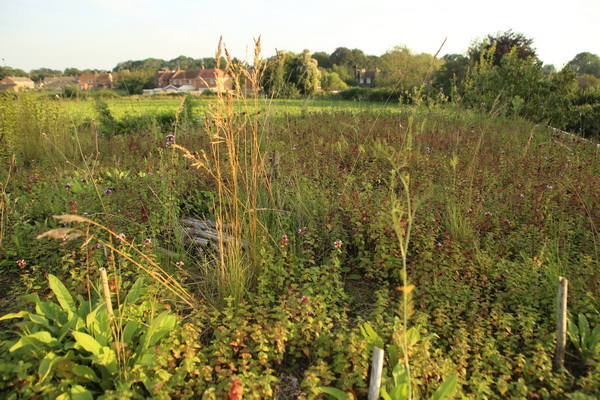 The hydration channel was fitted by our household insurers following minor subsidence to the property.  A large ash tree in our front garden was blamed, but we held out against it being felled and eventually the insurance company suggested the hydration channel. 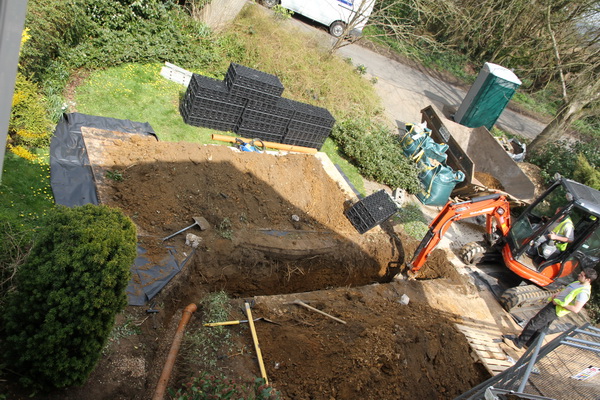 Essentially this is a crated system - which is not an approach we would normally favour for SuDS, but in this instance it is doing a very specific job. 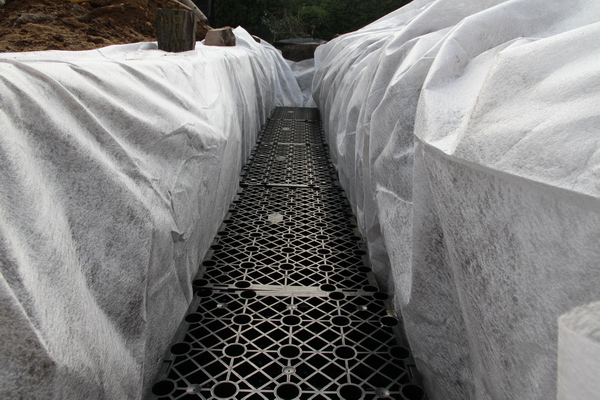 It is not a 'blocker' of tree roots but an 'attractor' of tree roots.  It receives rain water from a major part of our house roof, and then distributes it into an underground channel which runs across the front of the house, and which allows water to permeate to some depth. 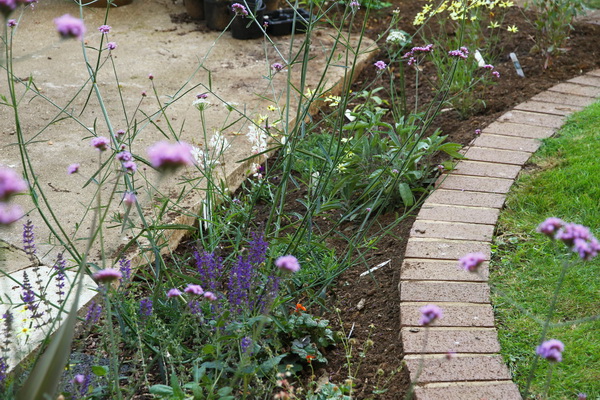 This is both sympathetic to the tree's needs and also acts as a useful attenuation device in times of storm.

Every downspout of the house is now diverted via water butt, ranging from a typical domestic one from our garage roof, to two large rectangular butts: one on the rear extension and one for the front roof which feeds the hydration channel.  The 'pièce de résistance' is our one cubic metre IBC (Industrial Bulk Container) tank, mounted on brick pillars and fed by the main area of the house roof.  This has been incorporated into a fencing/pergola system at the side of the house, to look attractive rather than, well, industrial. 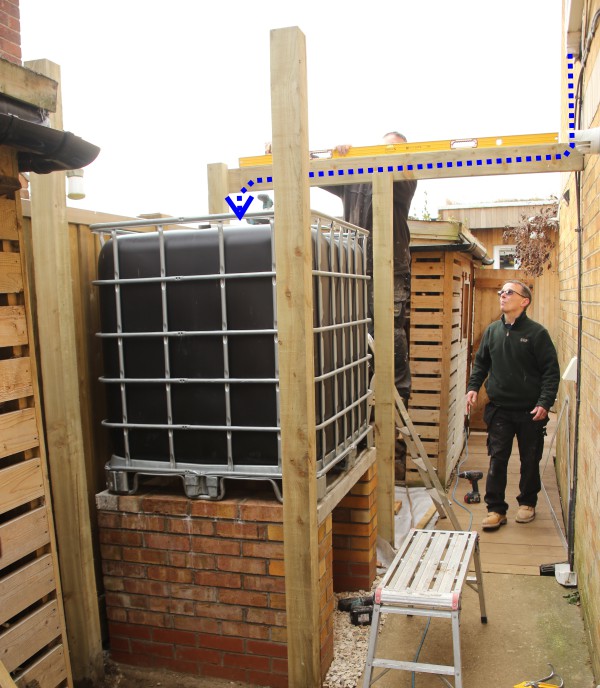 The IBC tank, under construction, before the screening panels were fitted.  Water from the downspout follows the blue dashed line.

Water butts in themselves are not great contributors to SuDS, because if they are near to being full, they cannot provide much capacity for stormwater attenuation.  However, there are ideas, being explored by Slow the Flow, that if enough water butt users in an urban area were signed up to an alert system before an expected storm, they could empty their water butts in advance and, collectively, make a substantial contribution to urban SuDS - to be explored further!  Besides, we need to keep water as well as deal with storms.

The overflow from all of our water butts runs into either the hydration channel at the front, or the rain garden at the rear of the house.  What rain garden?

The creation of the rain garden was documented here.  It was designed to take 100mm rainfall from the impermeable roof and patio areas, and in the two years since it was installed, we had not seen it get any more than a little damp.  That changed on 14 November 2019, when a near 50mm rainfall event saw it actually performing as designed.  Good to see it working, but the circumstances were not ideal - see below.

Our formerly concrete drive had all but worn out.  When it came time to replace it, we decided to go with a KBI Flexistone permeable system, incorporating a 'Type 3' stone base (which has a high void ratio for water storage) below. 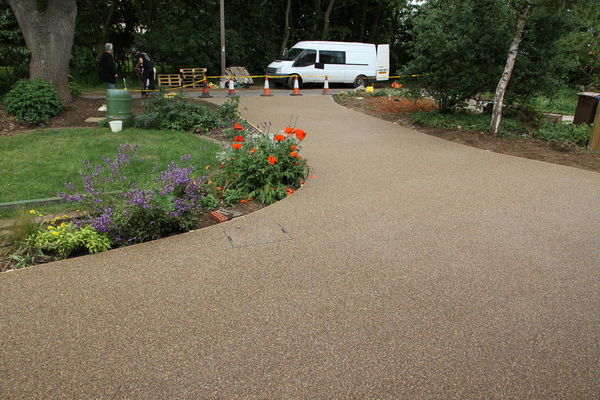 The permeable drive just after installation

We have been very pleased with the system and is is notable that when a rainstorm is pinging off the road at the top of the drive, there is very little to see on the drive - it behaves rather like a sponge!

You might think that all of the above would make us invulnerable to rainstorms - SUPER-HOUSE!  Well it would, if all we had to deal with was the water falling directly on our house and garden.  But on 14 November this year, there was a substantial overland flow of rainwater from already-saturated fields, which ran down our lane and across ours and our neighbours' drives. 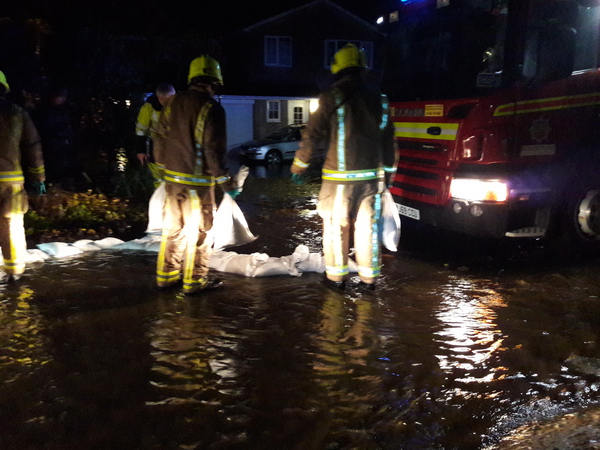 That's our house - beyond the sandbags

Only the timely intervention of the fire brigade with a pump, East Riding Council with sand-bags, and us digging grips up the lane, prevented ingress of water into the house.  Although 2007 was bad, this was a first for us, a reminder of the ever-increasing power of climate change, and something that we are determined to respond to as landscape architects. 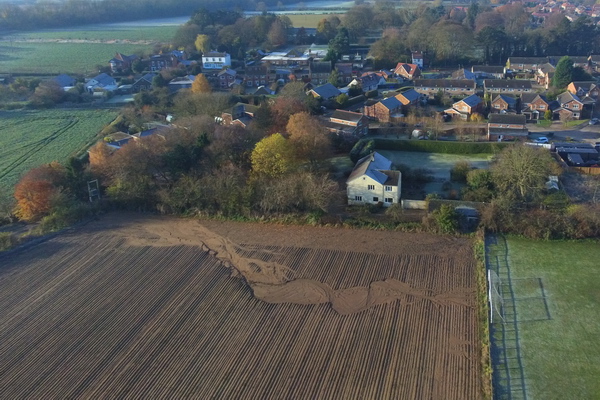 We have strong ideas about how the issue can be dealt with for our and our neighbours' properties, but also across the whole catchment which affects our local villages.  Slow the Flow may be expanding beyond Calderdale!  Hopefully we will have positive news to report, this time next year.